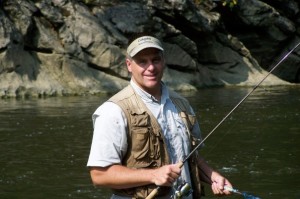 Eric Greer doing what he loves best…being a sportsman.

The story…one day, I received a call from Eric.

His first problem was that the major retail stores that he worked with were becoming more and more demanding of their terms. An example is that return allowances were in the favor of the retailer and quality issues that were minute in nature were being used as excuses to return merchandise to him for full credit. This was happening more often than he felt it was reasonable, but he felt helpless to fight as they were one of a few major customers that his family relied on.

Greer’s second problem was that the representatives that sold his products were paid a monthly “retainer fee”, and there was no accountability as to how often they were pitching his product versus another company’s. Long story short, he had many trust issues with these folks and felt helpless.

Eric knew that he had to make a change from his existing model and knew we had experience in online marketing. He wanted us to create a website and an in-bound marketing campaign for his family’s business. He wanted to take his products directly to the consumer and lower his order minimum to one. He also wanted to simplify his products to a limited set versus the very complicated sets that the major retailers wanted.

First, the site needed to be simple, easy to maneuver, and provide a way to contact someone by phone to take to the order.

The Rule – While I was fine with creating the site and beginning an in-bound marketing monthly plan, I had one rule. Eric had to allow me to publish his personal cell number on the site.

After building the site and reviewing the search terms he wanted, we agreed that it was time to start. Eric left my office and drove to his plant. This is about a 30-minute drive. About half way there…the cell phone rang.

Today – Eric continues to grow his business into orders of over 55% more than his previous sales – based on our in-bound internet marketing and organic web development.  He is now constructing a new building to double his production capacity.

Eric says people tell him all the time that in-bound internet marketing doesn’t work or doesn’t work for small businesses.  He just smiles and says, “It does for me!”

We are proud to call Eric a friend and a customer.  If you would like to view Eric Greer’s website, visit pillowformsonline.com, and then schedule a consultation to see how a simple site and marketing plan can make a difference in your life.